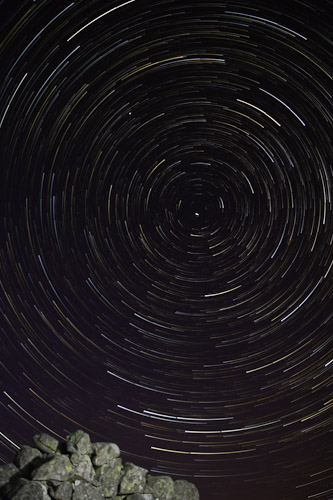 I recently got the opportunity to try my hand at making a startrail image, something I had wanted to try for a while. The result is the above image. One of the main problems faced when attempting any kind of long-exposure photography at night is light pollution. With all the light sources in towns and cities, the sky takes on a familiar orange glow. I figured that balancing the light pollution with the stars could be tricky, at least when trying to get lots of stars, including the dimmer ones, in the picture.

When I read the news that Galloway Forest Park had become the UK’s first Dark Skies Park I decided that it would be a great place to go to try this technique. The Dark Skies status means that, within the park, there is very little light pollution from surrounding light sources, resulting in near total darkness — perfect conditions for star-gazing.

Several months passed, and I had not yet planned a trip. Then, one night, in the pub, a friend and I decided to go wild camping. We were in Galloway for three nights but only the second night of the trip provided the clear skies necessary for star trails. I was chuffed to bits that it happened on the night we were camping at a location called “Fore Starr” — a ruined old building.

Once the sky had darkened sufficiently, I was able to begin my experimentation with star trails.

I took a few shots using high ISO to get the focus right for the stars and to get a feel for the necessary exposure. To focus, I began at the extremity past infinity on the focus ring and slowly worked it back, taking images and checking them until I was happy. I wanted lots of stars in the image, set against a black sky so I reduced the ISO back down to 400 and fine-tuned the exposure. I decided to go with (the commonly advised) settings of my lens’ widest aperture (f/2.8) with a 30s exposure. Checking the histogram, I could see that this was giving me pretty much what I wanted. The lens was a Canon 17-55mm f/2.8 IS set at a focal length of 17mm.

For my first test, I decided to point directly at the North Star, to achieve a spinning disc of stars, and included only a little foreground — the top of a ruined wall. I set the camera going by locking-off the shutter on my remote release (Canon RS60-E3) and left it to take pictures.

During the first frame, I painted the rocky wall with light from my headtorch. About half-way through the sequence, I checked on the camera and noticed that condensation was becoming a problem as the air temperature had dropped. The front of the lens was fogged up, so thinking this might be ruining the exposure I decided to wipe it off. I shone my headtorch into the lens whilst doing this and so a couple of frames were lost in the middle of the sequence. If you look closely enough at the image, you can see the gaps and also the darkening of the trails.

After about 90 minutes, I decided to end the exposure. At this point, I had no idea if I had been successful or not. I would only know once I got home and stacked the images. I could see that the individual exposures looked good, so I was happy.

For my next shot, I was going to try and include more scenery and foreground interest. However, whilst sat in the opening of the tent sorting out my gear, I noticed that everything had suddenly been covered in frost — the condensation was now freezing. I decided that given that I was tired after a long day and with a long day ahead, I would preserve my gear and hit the sack.

Back home, I began the task of post-processing my photos from the trip. Obviously, I was very excited to process my star trails. The plan was to take the 180 individual exposures and stack them together to form the startrail. There wasn’t really any decent software available for Mac OS to do this, and so I used my old Windows desktop machine, coupled with the excellent, and very popular, Startrails stacking application. As you have already seen, the result is at the top of this post and I am very pleased with it.

A couple of nights later, there was another clear night, and so I decided to try another, from the balcony of my apartment. Being in the middle of the city, the light pollution is much more of an issue and it can be a little trickier to get the exposure right.

I used the newly released StarStax app for Mac to stack it. I’m really pleased there is now a stacking app for Mac — it did an admirable job and many people have been raving about the app on Flickr as it is just what they have been waiting for. You can see that the light pollution has a big effect on the exposure, the number of stars visible in the sky, and the overall look of the image. You can also see that I set the camera up slightly wonky on the tripod :/ I’ll definitely be attempting star trail images in the future and I’ll probably be back in Galloway to try it!