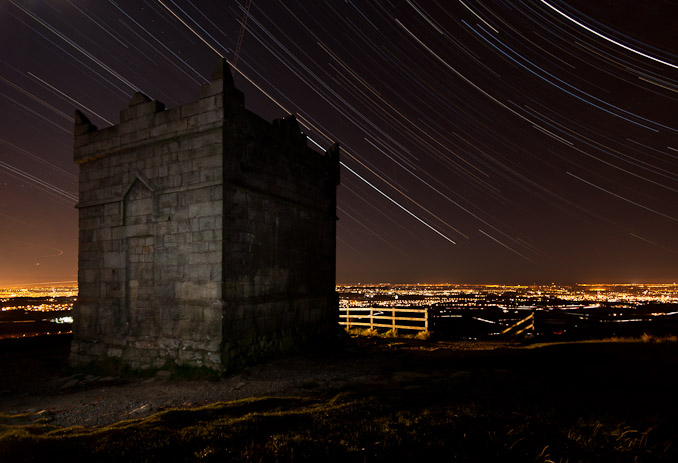 My posts are getting a little out of order because I have been lazy about processing my photos and uploading them to various places. I’ve been back to Galloway since I started this blog, and I recently returned from Amsterdam. In fact, I even have a hard drive full of photos from Spain, last Christmas, that I have not fully processed! Posts about those trips will come, eventually.

This post, however, is another star-trails image. This time taken last night (Sunday, 8th November, 2011) at a place called Rivington Pike, near Horwich, Lancashire.

The weather forecast had predicted a clear night, so I headed out with my camera gear, a headtorch, the book I was reading, and five layers of thermal clothing. The drive up the hill got a little scary — the road/track really wasn’t suitable for a regular car. At one point, I had to reverse back up a very narrow dirt track part when I realised I was approaching a step I would never get up. Instead, I had to brave the rougher, bumpy and rocky track. I parked-up and took the short but steep ascent to the tower at the top of the hill.

I checked out a couple of angles before settling on the one above. I wanted to get some of the urban light from below. Moonlight was going to be too much of a problem in my first chosen angle back towards Bolton and Manchester, so I chose a view further out west.

About halfway through the exposure, I heard some approaching vehicles and then saw them on the track below, in the distance. As they approached and the track disappeared from view below the hill, I put down my book and I walked out a little to see if I could see them. Imagine my surprise when a set of headlights crested the brow and came right at me! The group weren’t expecting anyone else up here, and I wasn’t expecting any visitors — especially Range Rovers! As a result of the cars’ lights, I had some glare and background impressions that I had to mask out of the final image, but the illumination of some of the foreground was quite nice so I left it in.

Anyway, here are some more details about the image: