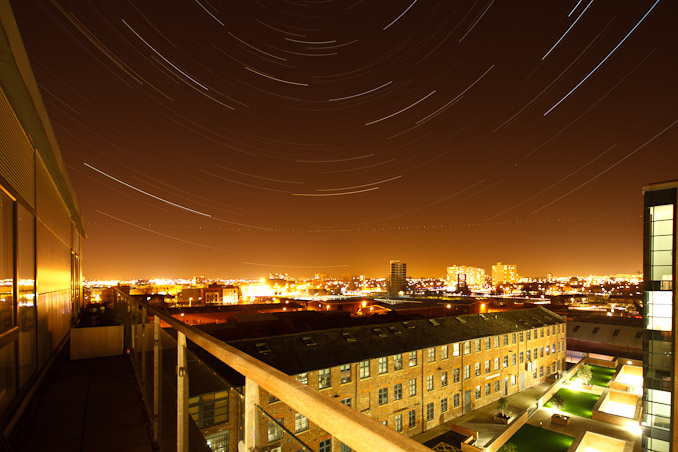 Last week saw the return of the BBC’s Stargazing LIVE, three days of live shows celebrating “the wonders of our night sky”. After an after work meal, I returned home to catch the end of the main show and the “Back to Earth” Q&A show. Fortunately, the sky over Manchester was clear, with no clouds and little haze (a rare event). So, with a little inspiration from the show I set-up the camera on my balcony to take a startrail facing north.

I’ve tried to take startrails of this view a few times before, but they’ve never really turned out. This one came out ok!

It isn’t my greatest star trail, and there’s a lot of light pollution*, but I thought it was good enough to upload to Flickr, and add to the Stargazing LIVE Flickr Group on Tuesday evening after I’d been to the pub.

Watching the show again on Wednesday, I was pleasantly surprised to hear my name read out by comedian John Bishop, as my photo was featured on the show!

(* I experimented with pulling the white balance back, but with it dragged too far the lights in the foreground looked wrong, the greens looked weird, and the balcony looked unrealistic. Dragging it back just a little left the whole image looking a bit drab. So, I decided to leave the orange cast pretty much as it was.)